I agree with Joel’s thesis that the Protocol layer will capture the aggregate of the value of decentralised stack. However, there was one element in his article that is mostly glossed over:

When a token appreciates in value, it draws the attention of early speculators, developers and entrepreneurs. They become stakeholders in the protocol itself and are financially invested in its success. Then some of these early adopters, perhaps financed in part by the profits of getting in at the start, build products and services around the protocol, recognizing that its success would further increase the value of their tokens. Then some of these become successful and bring in new users to the network and perhaps VCs and other kinds of investors. This further increases the value of the tokens, which draws more attention from more entrepreneurs, which leads to more applications, and so on. — Joel Monegro (Emphasis mine)

On first glance, this makes sense as it is akin to how network effects have developed in the past, each user making the network more powerful and so on. Except protocol networks are even more powerful.

Traditional network effects have helped Web 2.0 companies dominate because they create a ‘winner-takes-all’ market, and they are fiendishly difficult to create and easy to defend. Most feel that protocols will have the same dynamic (in a hype-drive), but will they?

Protocols won’t be a winner takes all market

In their current form, I believe protocols are not going to result in the winner-takes-all dynamic. Simply put, this is because economic incentives of controlled supply coins (i.e. Bitcoin) drive forks and competition (read ICO’s). Why? Because the economic incentives of these coins are skewed. To explain this point further, let’s use Bitcoin as an example.

The incentives of Bitcoin are incredibly powerful — it has created the world’s biggest supercomputer and bootstrapped the network effect exceptionally well. It bootstraps by creating evangelists out of users through aligned financial incentives. These super-users spread the word and encourage more users to join. More users mean more miners. Currently, miners are toiling and securing the network because they are paid to do so. This is the magic of crypto-network effects.

However, the current crypto-network effects breakdown for developers. Simply put, developers won’t toil away improving the Bitcoin network because they are not economically incentivised to. Why not? Let’s run through an example:

Developer John spends hundreds of hours designing an improvement to the Bitcoin proof-of-work system. This improvement will scale the network by a factor of 10X, with no security risks (and hypothetically also increase the value of the network by 10X). John wasn’t an early adopter so buying bitcoin is expensive, he only owns 1 BTC.

This is the riskiest move, but John decides to start his own coin. The coin uses John’s upgrade and because it is 10X better than Bitcoin, it starts to gain traction. John is an early adopter to this coin and mines the first 100,000 of this coin. For good measure, he also pre-mines a small % and sells it as an ICO (to pay his bills). Initial users are drawn (crypto-network effects take hold) and a BTC competitor is born. In 2 years, this chain is worth 10% of BTC ($8.5 billion) and growing fast. John now has $5 billion worth of this coin ($500 X 100,000). He is loving life.

Why are new chains happening?

Fundamentally, it is happening because developers, who are later adopters, are not economically incentivised to improve the BTC system. They are incentivised to create new chains, because they are not adequately rewarded for their improvements on the current chain. 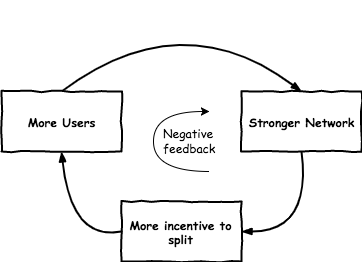 The blockchain and ICO infrastructure has made it increasingly easy for option 3 to occur. Litecoin is one example of this occurring with Bitcoin and I suspect there will be many more. As long as developers are not fairly incentivised for the improvements they make to the BTC network, they will not improve it en masse. It’s not just developers, advocacy groups and other key industry actors should also be rewarded for the value they are generating.

The solution is correcting economic incentives so developers are rewarded for protocol improvements.

Potentially through controlled inflation, where the additional coins are awarded to the upgrader in a bounty system with the criteria and reward size being decided by current coin holders. The reward could be <10% of the value increase, thus currently coin holders also benefit for the improvement. (10% would be $76.5 billion in the hypothetical case above). This has been written about before. I’m sure there are other solutions, but without a solution, the current network effects could drive down the value of individual protocols overtime causing multiple thin protocols.