As we move towards a more decentralized world, it has become apparent that tokens are critical in enabling true decentralization. DApp builders must design platforms that are both technically decentralized (Byzantine Fault Tolerant) and regulate the behavior of actors on the network without a central authority. Decentralized regulation of behavior, where participants can trust the economic rules in the system and the incentives created by those rules, is increasingly being classified as Token Economics.

The Newtown Partners team led the redesign of the Civic token economy, collaborating closely with the Civic team. Using game theory and some mathematical modeling, we developed a behavioral model that allows different actors within the Civic network to trust each other without a central platform authority.

We believe this is the first token economy design that takes the key constraints around identity protection into account, especially the inability to share Personally Identifiable Information (PII). Operating within these constraints, we have created a model that incentivizes good behavior, rewards good actors and punishes bad actors.

The updated token behavior model is published in Civic’s updated whitepaper and outlines:

In this post, we summarize the behavior model and describe why and how the model works.

Civic is a decentralized identity ecosystem that aims to revolutionize the KYC (Know Your Customer) industry by streamlining redundant document verification processes. It leverages merkle trees to store attestations of verified identities on the blockchain. Users can share subsets of their information with an entity, who can subsequently verify it on the blockchain. This design naturally lends itself to a marketplace, where information validators and information requestors trade user attestations in a peer-to-peer manner. Cue the Civic token, CVC. This is intended to power a KYC marketplace of Requesters, Validators and Users:

A simplified scenario would be: User Joe creates an account with a bank, JPM, that validates Joe’s information and adds an attestation to the blockchain. User Joe now approaches medical services provider PharmCo, who trusts JPM’s validation process. PharmCo can now purchase the attestation of Joe’s information from JPM for an amount cheaper than it would cost PharmCo to perform its own required KYC checks. Requester PharmCo does this by putting a certain amount of CVC into an escrow account. User Joe then sends the attested PII to Requester PharmCo who, if satisfied, releases the CVC in the escrow account to Validator JPM. 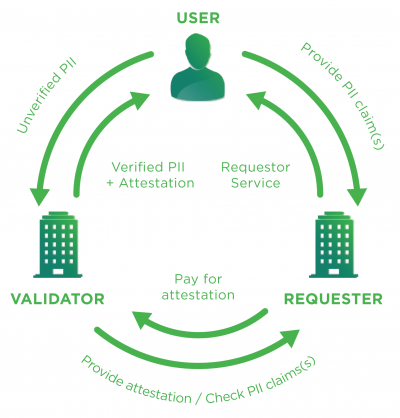 This system allows Validators to profit from expensive KYC processes while making identity verification easier and quicker for the consumer who can just share their verified information through the Civic app to anyone requesting (and willing to pay for) it. Requesters will be happy to pay for attestations from a verified source as long as it is cheaper than undertaking KYC validation themselves.

The original Civic whitepaper clarifies the purpose of the network and technical aspects of the attestation process. However, it does not address how the ecosystem protects itself from attack vectors and collusion by actors. It also does not explain how entities can trust each other in a decentralized network with no central arbitrager. The new whitepaper includes an in-depth analysis of the risks to the Civic network.

Among the pertinent questions which needed to be answered were:

Tricks of the Trade

Our chosen model uses an extensive-form game to model the decisions to be made by the relevant actors. After motivating choices for its structure, we convert this into a normal-form game. A normal-form game is a table representing the choices of each actor in the transaction and the payoffs of each choice for each actor.

The payoffs will be primarily determined by a combination of penalties and rewards (in the form of CVC) that the system will enforce. These penalty and reward mechanisms will ultimately allow us to influence Validator and Requester behavior.

A Nash equilibrium represents a set of strategies (one for each actor) such that no actor has anything to gain by switching to a different strategy, given the other actors adhere to their original strategies. We will see that if:

then we can construct an incentive system (through influencing the payoffs of certain decisions) producing the behaviors we want. This process is largely based on backward induction. We effectively want to ensure that the expected payout of behaving honestly is greater than the payout of behaving dishonestly.

Should a Requester reject a Validator’s attestation (whether incorrect or correct), the Validator incurs a penalty Pe CVC and the Requester is rewarded Re CVC. Why does this outcome occur even if the Validator was honest? Because we can’t tell whether the Validator was being honest or not without a third-party examining this data, so we can’t differentiate between the two scenarios. 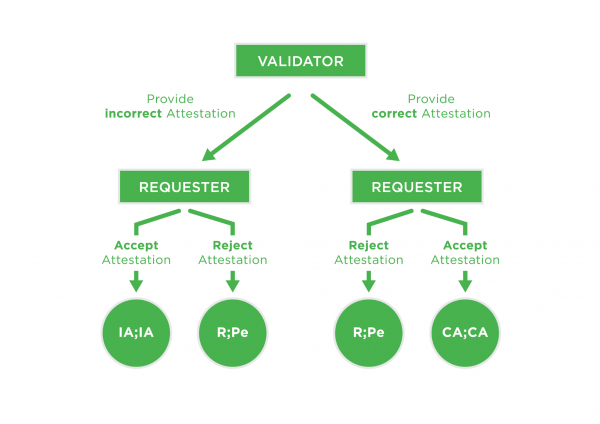 Figure 2 describes an extensive-form game of a Validator and Requester interacting. The leaves are the payoffs in the form (Requester payoff; Validator payoff). While R and Pe are quantifiable, the costs of an accepted incorrect attestation IA are more reputational (and risk-related) than financial. The payoff of a correct attestation for a Requester CA is related to the savings by using this system as opposed to their own KYC process.

To offset the clear ability for abuse by Requesters, we introduce an additional stage in the process. Instead of rejecting an attestation, a Requester flags an attestation if they believe it is incorrect. The Validator then has the choice to accept or reject this flag. The penalty to the Validator is still the same whether they accept or reject the flag – otherwise they would always choose the cheaper option (and in the absence of financial incentive, reputational incentive dictates they choose honestly). However, now rejecting or accepting affects the size reward the Requester receives. This can be seen in the new extended form below.

In Figure 3 we have an additional step of the Validator assessing flags submitted by the Requester. The Requester now earns a different reward (CF or IF) depending on whether the Validator accepts or rejects the flag. This difference will allow us to design an incentive structure that encourages the Requester to only flag incorrect attestations.

This can be converted into a normal-form game, which we can then use to construct penalty and reward functions in such a way that the appropriate Nash equilibrium is achieved.

The ideal scenario is:

These ideal scenarios allow us to define a set of constraints on the penalty and reward functions we choose to ensure they achieve the right incentives. The construction of these functions is predicated quite strongly on the rationality of the actors involved in terms of avoiding penalties and optimizing their profits and reputation (in that order). The full algebraic details of this voyage can be found in the whitepaper.

Using the accuracy of a Validator as the probability of a correct or incorrect attestation and the given penalty and reward functions, we can determine the ‘expected reward’ if a Requester is to reject all attestations to claim a reward. With the functions we have chosen and described in the white paper, subject to the constraints of the ideal scenario, we ensure that it is always more profitable for a Requester to accept a correct attestation and therefore to behave honestly.

We determined that a stake for validators is the most natural way to ensure they are able to pay their penalties. We constructed a staking function depending primarily on the accuracy of the Validator (to scale with penalty) and the amount of PII validated. The stake function scales diminishingly with the amount of PII validated to ensure Validators aren’t required to stake obscene amounts of CVC.

Validators are, of course, allowed to activate a withdrawal of their stake. Once activated, CVC is released back to them at an exponentially increasing rate.

With the staking mechanism we also ensure that usage of CVC scales with activity in the network. The more Validators entering the network, the more CVC is naturally demanded for staking. In turn, more Requesters will be drawn to the network producing a positive feedback mechanism. This is how network effects are leveraged to continuously grow the network.

Some Final Thoughts and Comments

Civic’s new token economy applies game-theoretic and mathematical models to interactions between individuals and institutions. By using this kind of approach, we were able to formulate a system that aligns incentives without requiring overarching governance and oversight mechanisms. We believe similar models could be used in a variety of token economic contexts to facilitate stronger incentive behavior.

The CVC token, which underpins this behavior model, acts as a true utility token. It is incorporated into the economy as a fundamental tool to direct payoffs and facilitate transactions in the identity marketplace. Additionally, the token captures the value of the network naturally through the incentive design and devoid of any mechanism encouraging holding purely for speculative gain.

The design of the Civic token economy was a rewarding process for everyone from Civic and Newtown Partners involved. It followed many iterations, and exposed us to many novel ideas in the design of token economies. We’re excited to see how these ideas evolve as token economy design does and look forward to hearing your thoughts.